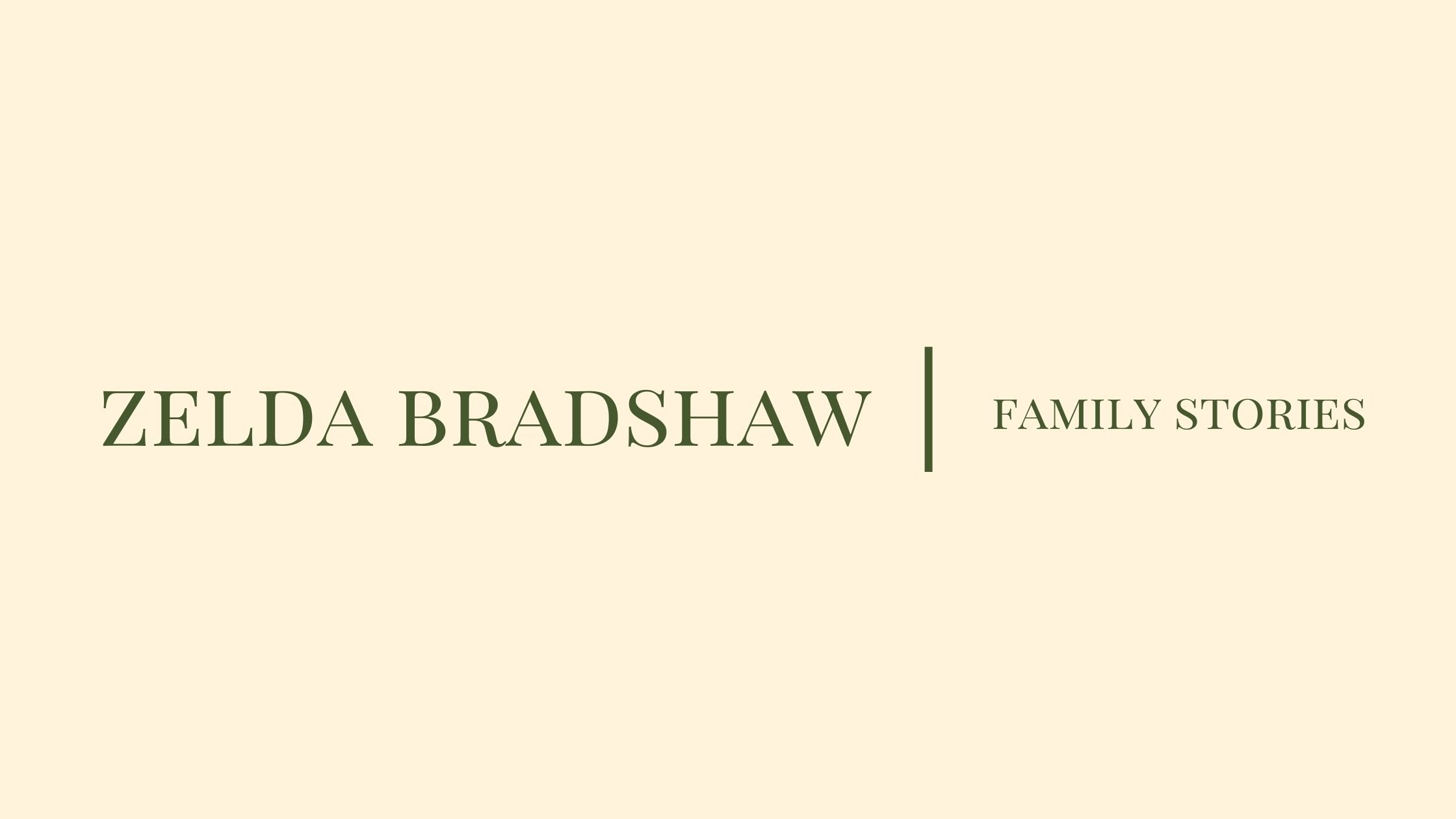 Zelda Bradshaw was my Nana (my father’s mother). When I was a journalism student (back in 1992) I asked her to share her stories. Here’s what she said – and this does capture how she spoke (as I was able to do shorthand in those days …!).

A really nice thing was that Dad was able to read this out at Nana’s funeral.

I was born 2 May 1913, at Spery Home in Thames.  I was the biggest baby delivered, at 16 pounds, and I looked like a three months old baby when I was brought home.  I was one of five children: Reg, Harry, Eunice, me and then Maurice.

My mother was Angelina Lukey, who had a brother called Ben.  She was a church lady.  She belonged to the Methodist church and sang in the choir, including solos.

My father’s mother was Edwina Heath, a lady who painted and played piano.  Her father sang around the house.

Before my mother died we had a great life, we really did.  At Christmas and New Year we went up on the hill at the Kopu turnoff for picnics.  My father, Arnold Taylor, had a homemade bach down on the Thames Coast.  My mother loved it.  There was a stream behind the bach which she swam in every day.  She was a big lady and wore an overall in the water, then swapped it for another one she kept down there.  My father used to come down at the weekends, bringing supplies in a horse drawn vehicle.

He and his brother had Taylor Fisheries.  They went out trawling.  We always had nets around the place, for mending and drying.  Eunice and I used to get up and have a cup of tea with him at 4.30 in the morning.

There was never any swearing in our house.  My father was a real gentleman.  Vic Rainer lived nearby and came around on Sundays for a hot bath.  We never had a lot of money, but we were happy.

I was only five when Angelina died in 1918, of influenza.  Eunice and I travelled by boat to Northcote, to live with two of Dad’s sisters.  I stayed with Aunty Ava Parish.  They had strawberry gardens.  I didn’t like being there.  If someone takes you, if they think they should, you’re sort of a misfit.  I started to wet the bed.  I had no one who helped me with the reading.  I wasn’t very good.

Eunice was 18 months older.  I saw her in that time.  When it was her birthday she asked half the class home.  That was not appreciated.  She was a law unto herself.

When my father remarried, to Georgina Buckley, we kids went back to the Thames.  Reg only called her Mrs Taylor.  Reg was red-headed and he used to want to do things that his stepmother didn’t want him to do, like bringing his bike into the house to fix it up.

He stayed three weeks then boarded somewhere else in Thames.  He worked in a menswear shop.  Harry was a paper hanger.

When I was about seven we moved to Grey Lynn, travelling to Auckland by tram.  My father worked at Sanfords.  He did the smoking of the fish at night.  Everyone else was called by their first name, but he was always Mr Taylor.

Arnold Taylor was a bookworm and a labourite.  When the depression was starting, Sanfords talked about giving the women the jobs, because they were cheaper (2 pounds a week).  My father went to court and said what a dreadful thing it would be to bring the women in.  He thought it was no place for ladies.  Sanfords couldn’t put Mr Taylor off, but Reg and Harold were also working there and they were put off as pay back for him speaking up like that.

Aunty Min’s daughter, Vi, died of a heart attack when she was 23 and a half.  She was engaged to George, and real lady like.  My father wrote to Aunty Min to ask her if she would like me to come down and live with them on the Thames.  I was 16.  I helped in the shop, selling cakes, icecream, lollies and fruit, and stayed there until Aunty Min sold the shop.

George’s half uncle went there, to stay until he found board, but ended up staying 26 years.  ‘Unc’ was lovely, a real gentleman, and did the books for the shop.  George’s father was a rotter.  Uncle Jim, Aunty Min’s husband, was a crank.  I tried to keep out of his way.  He had a deep contralto voice.  He was English too, and his surname was also Taylor.

My father, stepmother, Eunice and I shifted out to Point Chevalier.  Eunice completed a five year apprenticeship making shoes but then there was no work.  She went to Remuera and worked as a housemaid.  I went to Ohaupo, helping children on a farm.  I went home in the winter time because they couldn’t afford to keep me there.  Then next season they asked me if I would like to come back.  After that I started working in the private hotels.  I did a season at the Chateau, then worked at the Cargin, a big hotel in Auckland, for two and a half years.

The job was a lot of dishwashing; there were about 50 staff.  I used to look after the room where the staff had meals too.  Eight or nine men did the cooking with a great big stove in the middle, with ovens around it.  We had a bedroom downstairs with two of us in it, which was part of a corridor with about eight of us, and we shared a bathroom.

Eunice was very good to me and if I had the night off from the Cargin I used to stay with her.

I used to go down to the Thames when George was seeing Vi.  It was eight years after Vi died.  I was surprised when he rang, I thought he just wanted someone to talk to.  I always liked him.  Very quickly after that he asked me to marry him.  I had no questions about marrying him at all.

George used to come and see me on a Monday.  He had a motorbike but then got a car and he used to fill it with people who wanted to go to Auckland for the night.  He used to milk a bit early and come up.

George was struggling on the farm, getting it going.  When George bought the farm he came up on a horse, and brought his dog with him, and a couple of times that dog went back to where he came from (all the way back to Netherton).  He took a little bit of settling down.  George had cattle and he had to bring them over to put on the land, going over the Kaimais way.

We married in Waihi, and no one from my family came.  My stepmother wasn’t interested, and no one had any money.  It was George’s idea to get married in the Methodist Church in Waihi.  All his family came.  Glad made the wedding cake and iced it.  After the wedding we had food out on the farm.  George’s mother gave me dishes to put things in, pots and pans, and two cases of bottled fruit.  It was all we had in the cupboard to start with.  Uncle Harry gave me a silver dish.  I was 25 when I got married and 26 when I had Ken.

We kept butter in a safe under the tree.  The way to set a jelly was to leave it under a tree overnight.  I remember the big fridge we got.  Mary Lett came along and wanted to see inside it and all it had in it was a little thing of cheese.

George had bachy tables and chairs.  Eunice came out to stay and passed remarks about the wobbly table.  George didn’t like Eunice for commenting on the furniture.  He didn’t like her and she didn’t like him either.  She was very outspoken.  She thought he was too tough in making me live like that.  She thought it was a come down to be on the farm but I didn’t.  He was glad when she went home and she was glad to go.

I was quite happy out on the farm.  I never felt lonely..  I don’t have to have people around.

Old lady Angle lived next door.  She was lovely.  George used to pick her up and take her to town.  He always used to put his roast in her oven to cook.

George didn’t laugh at things I laughed at.  He was especially embarrassed when I laughed out loud at the movies.  He used to poke me in the ribs.  I don’t think it stopped me.  My father had a really good sense of humour.  I reckon I collected some of it.  I think it’s something you really need.

My father died of rheumatoid arthritis, aged 67.  He didn’t have any money at all when he died.  Nothing.  Dad went in for things he didn’t know anything about.  He wasn’t a businessman.  When he ran a bookshop in Grey Lynn, if people couldn’t afford the book, he gave it to them.

Reg had offered to have his father in his home at the end, but not his stepmother.  But Dad wouldn’t leave her even though there was no feeling between him and my stepmother.

Maurice went to war.  His wife left him, and when he finished up he hung himself.

Grandma (George’s mother) lived in a cottage on Gladys’ farm until the family thought she was too old.  Then she came out to Waihi, but she was never happy there.  She missed her old friends.  I can’t say it was a lovely idea.  George used to get a bit furious – when he got the car out she would sit in the front passenger seat so I had to sit in the back.  I wouldn’t inflict myself on family.  I don’t think it works. 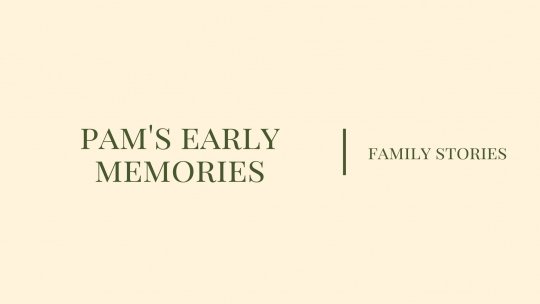 Pam’s early memories of life in the Thomas Family 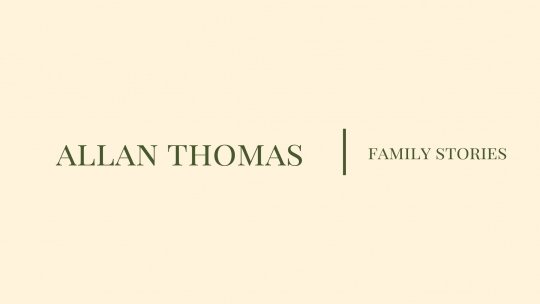